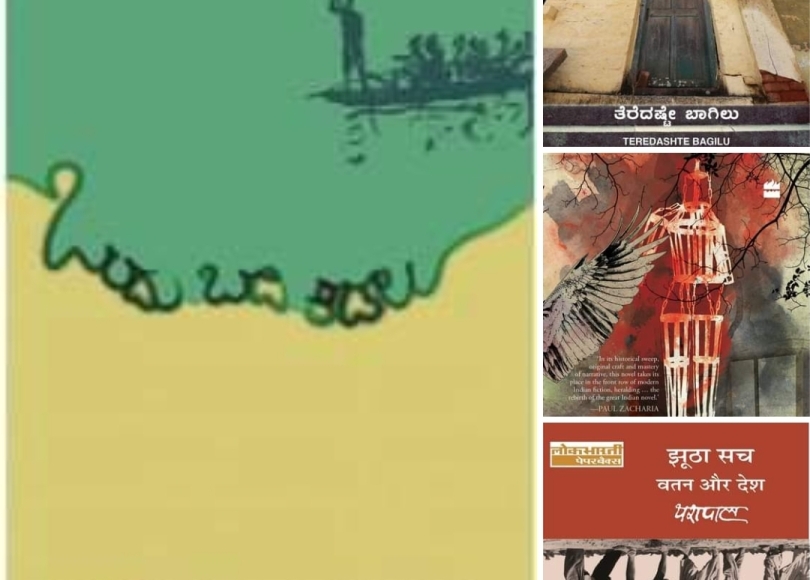 What’s the universe trying to tell me? 🙂

M.T. Vasudevan Nair’s Bhima, on the battlefields of Kurukshetra, visualizes death as mrutyukanya, the goddess of death. (If you’re a Saramago fan, you’d wonder if it is death or Death. But we’ll leave that for another day.) Bhima processes and reasons the deaths on the battlefield that have the most impact on him, through this personification.

In an uncanny coincidence, some of the works I’ve been reading after MT-V’s Bhima, deal with death in the very beginning. Not one or two, but I found four such instances. Especially in the long form of fiction, death is no surprise element and appears with unassuming regularity, but to have them as the initial chapters amuse me.

“Ondu Badi Kadalu” by Vivek Shanbag, won’t immediately start with death, but the reminiscents of death. Two widows, mother-in-law and daughter-in-law in relation, open the story for us. In the immediate chapter, just a few pages away, the demise of the son is detailed out. A school teacher comes home for lunch, sits in his lean chair, waiting for the wife to give food, life snaps out. Just like that!

In “A Preface to man” by Subhash Chandran too, the man enjoying his evening drink sitting in the balcony of a newly bought flat in an apartment, dies! Again, just like that! The reaction to death is in complete contrast to what happens in Ondu Badi Kadalu. While village in OBK is sympathetic to the loss of the family, but also are wary of loud-mouthedness of the duo, in ‘A Preface to man’ the urban setting contributes to comedy in a subtle, but hard-to-miss manner. After all, it is the ‘first death’ in the new building hosting 30 families together, and everyone is ‘aware’ of the fact that “apna number aayega”. Thank goodness, the funeral falls on a “second Saturday”, a holiday. OBK seems to drift into other stories, and I’m waiting for it connect back to this thread of widows. But ‘A Preface’ starts with the death of its protagonist, in a narrative hits the right spot of tragicomedy. What a bait to the reader!

Then comes, “Jhoota Sach” by Yashpal. It also starts with an elderly mother-in-law’s demise in Lahore in pre-partition times. What Yashpal meticulously establishes in the next few pages is exactly my early exposure to death, as a kid. My grandfather (Dad’s Dad) passed away when I was seven years old. (How we never received that news because of curfew in Hyderabad, and how we still ended up just a few days after his death is a story for another day!) The point that matters here is, the performative nature of the mourning. My aunts, especially them, given they are the daughters of the family, had to do all the wailing, but only when there’s a trigger; when some ‘guest’ walks in. The orchestrated sorrow left an indelible impression on me as a kid, so much so that, whenever I came across the lines later, “స్వతంత్ర భారతంలో చావు కూడా పెళ్ళిలాంటిదే బ్రదర్” (In independent India, even death is a ceremony like marriage!), I thought of only those 15 days after my grandpa passed away! Yashpal expanded my understanding that these are just Indian things, regardless of its status of independence!

Because I’m dilly-dallying with all these heavy texts and not seeing them through, I picked up a random short story to get a sense of completion. It happens to be Kaikini’s “Teradashte Bagilu”. The master storyteller sets of the story with a nightmare about the funeral process. I’m too tempted to translate it, but I’m too tired also. The story is about a son coping with his mother’s death and a strained relationship with his father. Because he doesn’t seem to find closure, the nightmares haunt him.

So, the mrutyukanya is following me in my readings and making its presence felt in ways I can’t ‘unsee’. Given that some of these books were accidental picks, and my motivations to read them were quite varied, it’s fascinating on how they all could be strung together with this prominent theme.

I've this great story to tell you, and every word is an absolute lie!